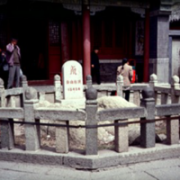 The philosopher Confucius (551-479 BC), one of the most revered men in China’s history, has recorded for all time that the ancient Chinese at the beginning of their history believed in a supreme creator-God whom they called ‘ShangDi’ (literally ‘Supreme Ruler’ or ‘God above’) or ‘Heaven’:

“How vast is ShangDi, the Ruler of men below”

Clearly, to the mind of Confucius, ‘ShangDi’ or ‘Heaven’ was the heavenly ruler and creator of all people from all nations, and not just the Chinese. In fact Confucius became a very devoted believer in God at about fifty years of age, as he states in his analects:

“When I was fifty, I knew the decrees of Heaven.” The Analects

Mozi (408-382 BC), another Chinese philosopher, was also a believer in ‘ShangDi’ or ‘Heaven’. Like Confucius, he also describes ‘Heaven’ as the creator-God of the whole universe and everything in it, including man whom He loved:

“Now Heaven loves the whole world universally. Everything is prepared for the good of man. Even the tip of a hair is the work of Heaven. Heaven ordered the sun, the moon, and the stars to enlighten and guide them. Heaven ordained the four seasons, Spring, Autumn, Winter and Summer, to regulate them. Heaven sent down snow, frost, rain, and dew to grow the five grains and flax and silk so that the people could use and enjoy them.” The Works of Mozi

How remarkable to discover that the ancient Chinese, unlike their modern counterparts, were creationists and not evolutionists. Mozi believed that Heaven created everything, from the tip of a hair to the sun, moon and stars. How sad that today’s Chinese have replaced their own indigenous religion with a godless philosophy propagated by the West.

Now that we know that the original God of China was called ‘ShangDi’ or ‘Heaven’, how did the ancient Chinese worship Him?

The following quotes from the writings of Confucius have left a clear record of China’s original religious beliefs going back more than 4000 years right to the beginning of their history:

“Emperor Sun sacrificed to ShangDi.” (2255 BC). The Book of History

“The Border Sacrifice is how men serve ShangDi.” The Doctrine of the Mean

Thus we learn that ‘ShangDi’ or ‘Heaven’ was worshipped in a ceremony involving animal sacrifices, with the chief participant being the Emperor of China. Sz Ma Qian, an official during the western Han dynasty (222 BC-8AD), affirms Confucius’s quotes and gives us additional information as recorded in the Book of Historical Documents:

“Erect an altar of earth on Mt. Tai and offer a burnt offering to Heaven.”

“No Emperor of China has failed to perform the Border sacrifice to Heaven.”

The sacrificial ceremony, also known as the ‘Border Sacrifice’, was performed annually on the top of Mt. Tai in Shandong province, on the eastern border of China. Therefore, it should not be surprising to find that Confucius was a believer in ShangDi (Heaven), as he lived in Shandong province not too far from Mt. Tai. Even HuangDi (the Yellow Emperor), from the so-called ‘Legendary Period’, is reported to have sacrificed to ShangDi (Heaven).

In the 15th century AD the site of the ‘Border Sacrifice’ was moved to the ‘Altar of Heaven’ in Beijing and continued there until the last century when the last Emperor of China was deposed (1911 AD).

Thus in China we have a system of religious belief involving a sacrificial ceremony of more than 4,000 years’ continuous observance.

Worship of ShangDi (Heaven) at the Altar of Heaven in Beijing

The Altar of Heaven complex, which is today an important tourist site, comprises three main edifices. The northernmost structure, the Hall of Prayer for Good Harvests, has on its north wall, a tablet inscribed with the following characters:

These characters clearly indicate that ShangDi (Heaven) was the God worshipped at the ‘Border Sacrifice’. This sacrifice took place every year at the winter solstice (December 22) and by reviewing some of the prayers and  songs used in the ceremony it becomes obvious how the Chinese revered their God:

“When ShangDi, the Lord, had so decreed, He called into existence heaven, earth, and man.” The Statutes of the Ming Dynasty

If we compare this with the Hebrew text of the Bible it becomes clear that the Creator- God of both the ancient Chinese and the Hebrews is one and the same:

“Praise Him, sun and moon, praise Him, all you shining stars…For He commanded and they were created.” Psalm 148:1-6

Both Chinese and Hebrew records state that God spoke everything into existence by His omnipotent commands, just as Genesis chapter 1 records. In addition, the religious ceremony of the ancient Chinese appears to be identical to that of the Hebrews as recorded in the Bible:

“Then God (Yahweh) said to Moses… ‘An altar of earth you shall make for Me, and you shall sacrifice on it your burnt offerings’….”Exodus 20: 24

Remember, as mentioned above, the Chinese Emperors offered their sacrifices and burnt offerings on an altar of earth on the top of Mt. Tai. Truly the God of ancient China is the same God as mentioned in the Hebrew Bible. One final recitation from the ‘Border Sacrifice’ is of note:

“Of old in the beginning, there was the great chaos without form and dark. The five elements had not begun to revolve, nor the sun and moon to shine. You, O Spiritual Sovereign, first divided the grosser parts from the purer. You made heaven. You made earth. You made man. All things with their reproducing power got their being.”The Statutes of the Ming Dynasty

The above quote can be compared with the Biblical record (Genesis 1):

“In the beginning God created the heavens and the earth. The earth was without form, and void; and darkness was on the face of the deep. And the Spirit of God was hovering over the face of the waters. Then God said, ‘Let there be light’; and there was light.’ …and God divided the light from the darkness…Then God made the two great lights, the greater light (sun) to rule the day and the lesser light (moon) to rule the night…Then God said let Us make man in Our image… Then God blessed them and said to them, ‘Be fruitful and multiply’…”

Conclusively, the original religion of China is similar to that of the Hebrew people as recorded in the Bible.

From ancient times right up until 1911 AD it had been the Emperor of China’s responsibility to obey the ‘Mandate of Heaven’ i.e. God’s will. This included performing the ‘Border Sacrifice’. But why did both the ancient Chinese and the Hebrew peoples worship God in a ceremony involving the killing of animals? This is because from beginning to end, the Bible teaches that beginning with the first man, Adam, all people are separated from a holy God because of their sin (Romans 3: 23; Isaiah 59: 2). The Bible also teaches that God is just and therefore must punish sin and, unfortunately for us, the penalty for sin is death (Genesis 2: 17; Romans 6: 23). This means that all people are on God’s ‘death row’ and at the day of judgement will face the death penalty and be separated from God for all eternity in the Lake of Fire. That is the bad news! However, there is also good news! Because of His great love for us (of which even the Chinese philosopher Mozi reminded us above) God provided a substitute to die in our place so that He might still be just (i.e. punish sin) but also be able to justify (acquit) and forgive sinners (John 3: 16; Romans 3: 21-26).

The animal sacrifices offered by the ancient Hebrews and Chinese symbolised a substitute dying in our place and pointed to the death of God’s own Son, the Lord Jesus Christ, who took the punishment for the sins of the whole world on the Cross. As a result anyone who accepts Jesus as Lord and Saviour is reconciled to God the Father and receives the free gift of eternal life based entirely on the merit of Jesus’ substitutionary death. Conversely, anyone who rejects Jesus’ substitutionary death remains condemned and on ‘death row’ ready for the day of judgement. In the New Testament, Jesus is called ‘the Lamb of God who takes away the sin of the world’ (John 1: 29). This is a perfect description of Him being sacrificed for our sins and is the complete and final fulfilment of the Chinese ‘Border Sacrifice’. Animal sacrifices for sin are no longer required by either Hebrews or Chinese, as God Himself has provided the ‘one sacrifice for sins for all time’ in His own Son (Hebrews 9: 11-12). All we have to do now is repent of our sins and trust the Lord Jesus Christ as our Saviour. Then we are reconciled to our heavenly Father and become His children.