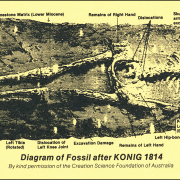 Human remains from the Lower Miocene

It is everywhere taught, and held to be a scientific fact, that man evolved from apes during the last million yeas or so. Various charts and diagrams are devised that purport to demonstrate the stages of such evolution. What is omitted, however, is a vast body of evidence from the fossil record which shows that fully human fossils are found in much lower geological levels which are interpreted as millions of years earlier than man’s proposed ancestors. Either the time-scale of the geological column is quite wrong, or fossil man often pre-dates his proposed ancestors.

One example of this is a human skeleton at present lying in the basement of the British Museum of Natural History. This fossil was dug out of the Lower Miocene deposits of Grande Terre, part of the Caribbean island of Guadeloupe. It still lies firmly embedded in a two ton block of limestone which is harder than statuary marble. It had embedded the bones while the limestone was still fluid. The burial was sudden and catastrophic, as evidenced by the articulation of the bones and the high organic content of the rock immediately around them.

The body had not yet decayed when burial occurred. The bones are therefore of the same age as the rock. Miocene sediments are reckoned to date from 12 to 25 million yeas ago, so this Lower Miocene human should predate all its ancestors! 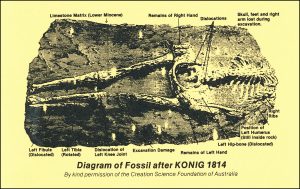 Skeleton in the cupboard

One curious aspect of this evidence is that the British museum have been in possession of this specimen since the Admiralty presented it to them in 1812. During the early 19th century it was displayed to the public as a curiosity. However, once Darwinism gained a foothold the specimen was removed from public display. I am given to understand, in fact, that I was the first member of the public to set eyes on it since the early 1930’s. The last geological survey of the island that mentions the presence of human remains in these deposits is that of Spencer in 1901.

An unspecified number of human remains were found fossilised within these Guadeloupe deposits, although this appears to be the only surviving specimen. Nor are these the sole examples of human fossils found too early to have evolved from apes. Others include early Pliocene remains, reckoned by geologists to be up to 12 million years old, such as those found at Galley Hill, Ipswich and Swanscombe in England, Castenedolo and Olmo in ltaly, Abbeville, Fontechevade and Clichy in France, Kanjera in S. Africa, Keilor in Australia and Natchez in the USA.

Not only does the geological age of this Miocene fossil not fit the evolutionary model, but it does agree with expectations of a creationist model. Although found at such a low stratum, it is a fully human female. There is nothing ape-like in its appearance.

Moreover, there is evidence of sudden burial which implies rapid laying down of sediments, in contradistinction to the gradualistic interpretations of uniformitarian geologists. We have noted that the skeleton remained articulate and with surrounding organic matter and the rock was soft at burial.