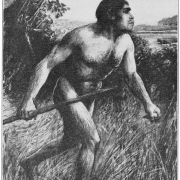 The town of Uckfield straddles the road from London to Eastbourne at about the three-quarter point when travelling south. Yet a mile or so off this main road one can enjoy the quiet beauty of the countryside much as it has been throughout the twentieth century. A little to the west of Uckfield, off an unclassified road, lies the long drive to Barkham Manor at Piltdown. On the left is an innovation- a well-tended vineyard; and to the right, neither hidden nor prominent, stands a stone memorial, unveiled on July 22nd, 1938 by Sir Arthur Keith, FRS. The inscription runs.

‘Here in the old river gravel Mr. Charles Dawson, F.A.S., found the fossil skull of Piltdown Man, 1912 – 1913. The discovery was described by Mr Charles Dawson and Sir Arthur Smith Woodward in the Quarterly Journal of the Geological Society, 1913 – 15.’

The Importance of Piltdown

Fifty years after the publication of Charles Darwin’s controversial book ‘The Origin of Species’ with its simple and seemingly plausible theory, the proofs and evidences it required to lend it credence were (and still are) non-existent. The Victorians had embraced Darwin’s idea of progress towards perfection with enthusiasm. ‘The survival of favoured races’ nurtured their racial pride and prejudice. But for the champions of Darwin’s theory, the state of affairs at the turn of the century was not satisfactory: if evidence did not exist, then it must be postulated and written about. This was the era of the ‘missing links’: the very term presupposes the existence of something the imagination has created. Evolutionist fossil hunters had convinced themselves that it was only a matter of time before the links would be found. Especially needed on their long list of wanted items was the link they postulated between ape and man.

Necessity is the mother of invention and therefore if ape-men had not been found, it was necessary to invent them. A complex web of events, beginning in 1908, was set in motion: the preparation of the fake pieces filed down and stained, the planting of these pieces in two sites roughly 2 miles apart, and the discovery of the ‘finds’, were all accomplished in the following seven years to 1915. And so the embarrassing gap was filled, the missing link uncovered. It was given a measure of respectability by its scientific name. Eoanthropus dawsoni, Dawson’s Dawn Man.

Charles Dawson was Steward of Barkham Manor and a solicitor with the Uckfield firm known today as Dawson Hart. He was Clerk of the Justices. He was an enthusiastic amateur archaeologist, and among his discoveries was a ‘transitional boat’, half coracle and half canoe, a ‘transitional horseshoe’, the first use of cast iron, a cross between a goldfish and a carp and a sea serpent which he saw from Hastings Pier. In short, Dawson, pillar of society, was the confidence trickster’s dream!

Between 1908 and 1912 Dawson found five bones, genuine bits of a human cranium. He showed his finds to Arthur Smith Woodward, the Keeper of the Geological Dept., British Museum, a friend of Dawson’s since 1884. Woodward began helping in the Piltdown excavations, along with P. Teilhard de Chardin, S.J. The latter was a priest teaching at Hastings, who had previously taught Chemistry at Cairo University, and who was to go on to make a name for himself finding human ancestors in Peking and East Africa.

From this time the fake pieces began to be unearthed. The half jaw of a female orangutan and a canine tooth which, it was discovered fitted perfectly into the jaw bone, were found by the priest. The origin of many of the finds was later traced to the Dordogne (near where Teilhard was brought up in France) and Tunisia, North Africa. Only the original cranium was prehistoric. Thus Dawson’s Dawn Man of Piltdown as displayed during the first half of the 20th century in museums throughout the world, was not all found by Dawson, was not prehistoric, was not a man, and was not all from Piltdown!

Before the Exposure of the Fraud

At a packed meeting of the Geological Society in London in December 1912 doubts were expressed as to whether the jaw-bone was human. The decisive canine find in August 1913 and the meeting in December 1913 at which the canine and the jaw-bone were exhibited did a great deal to strengthen the success of the plot and to allay doubts.

Among the doubters were Dawson himself and a number of local people. It may possibly have been a growing realisation that he had been the victim of an elaborate hoax which contributed to the breakdown of Dawson’s health and his death at fifty two in 1916.

During the 1920’s and 30’s some important articles and books on alleged human evolution were written. Reputations were made. Prominent figures such as Arthur Smith Woodward and Grafton Elliot Smith (Professor of Anatomy who had assembled the skull pieces) received knighthoods. Smith Woodward’s book on Piltdown Man, The Earliest Englishman, was published posthumously in 1948. It carried a foreword by Sir Arthur Keith, who had unveiled the memorial a decade easier. But by the late forties, conflicting views and new ‘evidence’ had rendered Piltdown Man awkward to the current thinking. It was now something of a nuisance, and just as it had been, earlier in the century, necessary to invent it, now at that century’s mid-point it was necessary to dispose of it. Accordingly in 1949 the Piltdown pieces were brought out for reexamination. Sir Arthur Keith died early in 1953 and in November of that year the fraud was publicly exposed.

The Aftermath of Exposure

Replicas and plaster casts of the reconstruction of the whole head of Piltdown Man were consigned to the cellars of 300 museums around the world. The artefacts themselves are in the basement of the British Museum. (Hundreds of doctoral theses had been written on what had turned out to be a fake. Students had found ape like features in the human cranium, and human-like features in the ape jaw.) The fact that the fluorine testing method used in the early 1950’s was dubious and unreliable was not to emerge until some time later. Suddenly the experts were able to see the file-marks on the teeth, flattened to look more human. They noted that the appearance of age was due to staining with dichromate. They found that the elephant thigh bone had been shaped like a cricket bat by a metal knife. Such bats used to be used by thatchers in the Dordogne.

Dr. Kenneth Oakley of the British Museum had reported fluorine tests on Piltdown Man in Nature in March, 1950. They concluded that cranium and mandible were of the same age. Yet Oakley was co-author of The Solution of the Piltdown Problem in November 1953. which revealed the jaw as modem compared with the cranium.

A Motion was tabled in the House of Commons which expressed

“no confidence in the Trustees of the British Museum” .

Early in 1955, the Oxford Anthropologist Dr. J. S. Weiner, who had helped debunk the fake, published The Piltdown Forgery. In this book, he castigates as the hoaxer the only amateur involved Mr. Chas. Dawson. Mr. Francis Vere, a historian who lived at Piltdown, broadcast on radio a defence of Dawson, and wrote The Piltdown Fantasy (Cassells, 1955). In 1959, Vere’s book Lessons of Piltdown was published by the Evolution Protest Movement (now The Creation Science Movement). Some local people, including Mr. Robert Essex, Chemistry master at Uckfield Grammar School, expressed their suspicions of Piene Teilhard de Chardin, who died in 1955.

In the 1970’s both Nature and New Scientist carried. articles suggesting that the Piltdown conspiracy was “a joke that went too far”, a “prank”. In a situation where eminent men of science have had their dignity scared, it is understandable that they should suggest that the affair was a hugely successful joke. However, such a joke required an expert to stage it. This exonerates Dawson. And it is strange that this ‘prank’ could survive a 40 year period. It was accepted because the experts wanted to believe in Piltdown Man. Keith wrote in
his Antiquity of Man (1925):

“That we should discover such a race as Piltdown, sooner or later, has been an anicle of faith in the anthropologists’ creed ever since Darwin’s time”.

In his Unveiling the Past (Methuen, 1970) Louis Leakey points the finger at Teilhard. In a letter to The Times in November 1978 and a further letter to Nature in the following February, Professor B. Halstead of Reading accused not only Teilhard de Chardin and the British Museum, but also the Universlty of Oxford of being involved in the hoax. He drew attention to the link between the BM and Oxford in both the setting up and the exposue of the hoax. In his 1977 book, Ape-Men, Fact or Fallacy, Malcolm Bowden also concludes from the evidence that Teilhard was the perpetrator.

In 1983 the American Dr. John Winslow promoted his theory that the “prime suspect” was none other than Sir Arthur Conan Doyle, creator of Sherlock Holmes. Sir Arthur lived less than ten miles from Piltdown at Crowborough and had visited the Piltdown site. In a letter to the Daily Telegraph, Dame Jean Conan Doyle refuted her father’s involvement as a “wild surmise” and wrote of her father’s belief that the find was genuine. She added:

“myths are born at the expense of the truth”.

This is especially so in the field of man’s alleged ancestors. In 1985 former Sussex County Analyst Samuel Woodhead came under scrutiny. Then in 1996 a canvas trunk was found in attic space at the British Museum bearing the initials MACH, being those of Martin Hinton. Hinton was the Museum’s Curator of Zoology at the time of the fraud. In the trunk were found teeth doctored with chromate like those found at Piltdown. Hinton may have been involved in the fraud in order to embarrass Smith Woodward. Or he may have suspected the fraud and conducted his own research. Or again, someone else may have planted the items more recently to confuse the issue. Whoever was responsible for fooling the experts for forty years could certainly have added this to his list of hoaxes.

Any discussion of man’s origin will arouse the deepest feelings in us all. Some people attribute all things to an evolutionary chance process and others to a Creator God. At all times there have been leading scientific figures who have championed one or other belief.

It cannot be denied that the Piltdown affair was plotted and sustained by adherents to the evolutionary faith. They believed that man is a little higher than the apes, in contradistinction to the Christian’s faith that Man is created in the image of his Maker. In the Creation we find man as a separate creation, distinct from all other things. We find at the Incarnation that the Creator “was made in the likeness of men”.

It is apparent that there can be no harmony between two such diametrically opposed beliefs. Much confusion has arisen because some writers have attempted to forge a compromise. They have pleased neither faction, but rather have raised more problems than they have solved. The question is arguably the most important issue we each have to face.

Significantly, by 1987 (mitochondrial Eve) and 1995 (Y chromosome Adam), the geneticists had demonstrated that all races of men are descended from both one woman and one man.

When Sir Arthur Keith unveiled the memorial stone in the drive at Barkham Manor, near the village of Piltdown, he saw a race of ape-men like Eoanthropus Dawsoni as substantiating an article of faith in his creed. His faith was founded on a fraud.